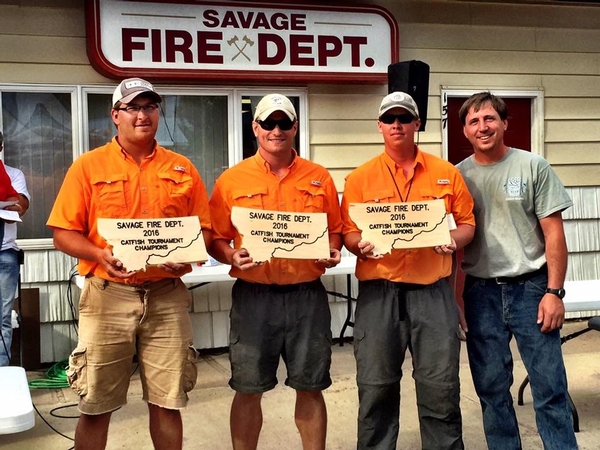 This year was unlike any other on record, however, as twenty-five teams out of sixty weighed in over seven pounds. (a weight that is typically impressive enough to take home the title). Fighting their way to the top of a field littered with impressive weights was the trio of Brenner Flaten, Glasgow, Chad Dawson, Dickinson, ND, and Cole Plouffe, Glendive. Using a run and gun approach and a plethora of different baits, the champs set a NEW all-time tournament record with a basket of fish tipping the scales at 8.305 lbs. “Anytime you can win a tournament it just feels great, regardless of the event or the money on the line, taking hardware home is awesome”. Dawson, Flaten, and Plouffe have teamed up the past four years in Savage and had previously finished in the top six in both 2013 and 2014. Flaten becomes the first 2-time champion in event history. His previous title came in 2006, while teaming up with Jason and Brady Flaten......... 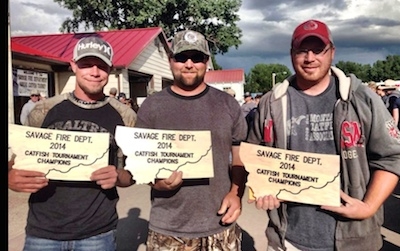 6/14/14 Savage, MT – The Annual Savage Fire Department Catfish Tournament has carved out quite the niche for itself over the past eleven years.  Savage’s unique “slot fish” rules have become common knowledge by now and has turned into an event where even the most avid “big fish” angler enjoys a weekend to just “change it up” a bit. For those in the dark, SVFD’s annual event is held in Savage, MT. on the beautiful Yellowstone River on the second Saturday of every June.  Anglers are only allowed to bring in their five biggest catfish to weigh-ins.  Here is the kicker however; all of those catfish must fall between 12” and 18”.  This causes veteran catfish anglers to change up their tactics a touch and also start looking in new areas.  Anglers must adjust their way of thinking, chasing the big fish won’t pay off here.  Everyone must try to focus on what attracts the little guys, so to speak.  Weigh-ins are always an adrenaline rush and that carries over to the awards presentation on Saturday night........ 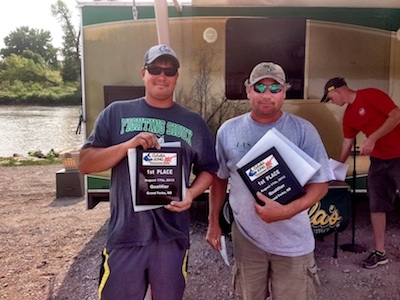 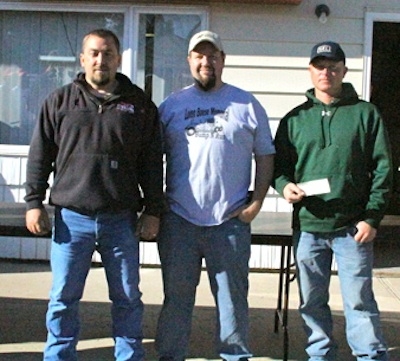 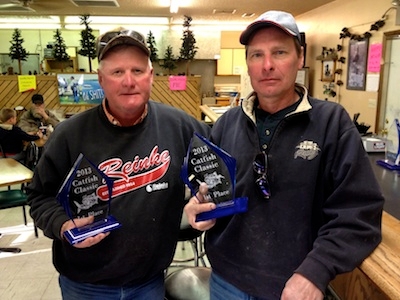 Lewellen, NE 5/4/13 – The 16th Annual Lake McConaughy Catfish Classic took place over the weekend and impressive baskets once again littered the weigh-ins. With the lake being down dramatically from last year, it forced some teams to change up their approach. Some teams undoubtedly struggled with the difference in water levels, while others seemed to have adjusted without fault. As with any other year of this event, every team has to deal with the difficult decision of fishing the lake in the comforts of their boat or hoofing it on the banks of the North Platte River in search of some success from the shore. The decision you ultimately make can make the difference in an appearance near the top of the leader board or one that has you bringing up the rear.

For the second consecutive year, Kevin Robertson and Doug Canning manned their airboat up the river to produce a ten fish limit that no one else could challenge. Robertson and Canning are the first to win back-to-back titles since tournament results started being recorded. And for the second straight year, the team that they nipped for the top prize was their sons. Nathan Robertson and Jeremy Canning, also fishing from an airboat, claimed the runner-up trophy for the second consecutive year. As if last years loss of less than one pound to their fathers wasn’t enough already, the duo would come up less than 1 1/2 pounds short this go around. Excruciating losses for family bragging rights for the both of them, but an unbelievable performance nonetheless for the second straight year. Both of these teams deserve a ton of credit for winning last year and then coming back and proving no luck was involved. As of right now, they all deserve the title of “Cat Classic Kings”.

The top ten looked eerily similar to previous years, especially last year. Seven of the top 10 teams from 2012 returned to the top ten this year. Last years third place team of Mark Canning and Alex Canning finished a very respectable 10th place. Finishing in third place this year was Kendal Kessler and Bob Mallard. As was the case with the top two teams, Kessler and Mallard also targeted their cats in the North Platte River throughout the day. Nathan Robertson and Jeremy Canning captured their own repeat of sorts over the weekend by capturing their second consecutive big fish award. Their cat tipped the scales at 12.72 lbs., the biggest cat caught at the Classic in many years. Two other cats were weighed in at over 11 lbs., proving the big fish are definitely out there to be caught.

The Lake Mac Cat Classic just never seems to disappoint. Every year it is one of the most well attended events in catfish tournament rich Nebraska. The teams come back every single year to Darrell and crew at The Oregon Trail Trading Post. Everyone comes back because they put on a truly fine event. Do yourself a favor and pencil in May 3rd, 2014 for the 17th version of this tournament. You will be treated to a calcutta and social on Friday night complete with a free team meal and Saturday will provide you with ten hours of non-stop tournament action. Please enjoy the complete results from this past weekend.