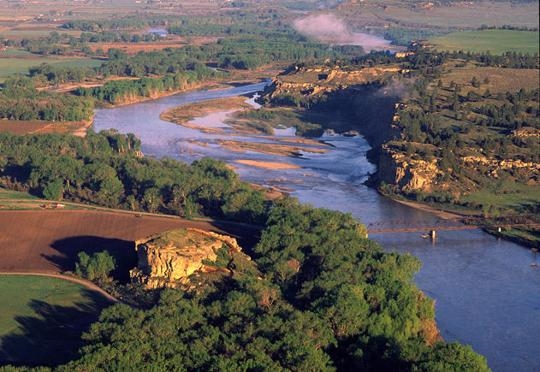 Channel Catfish, Stone Cat, Black Bullhead, and Yellow Bullhead inhabit this river system. Home of the previous state record Yellow Bullhead (0.72 lbs.), caught by Wade Fredenberg in 1987. The Yellowstone is by far the most popular catfish river in the Big Sky state. The section of river stretching from Huntley to Miles City receives the most pressure from the catfish crowd. Catfishing is exceptional throughout the year in this area, but tends to peek in the pre-spawn (early April to early June). An average Cat tips the scale at nearly 7 lbs. , but fish in the 10-15 lb. range await on every bend in the river. This river is host to the Annual Savage Fire Dept. Catfish Tournament held out of Savage, MT in June.

The Yellowstone River originates in Wyoming and flows through Yellowstone National Park before entering Montana at Gardiner. From the park boundary to Livingston, the river flows north through Paradise Valley, flanked by the Absarokee Mountains on the east and the Gallatin Range on the west. It continues in a northeasterly direction from Livingston and meets up with the Missouri River just across the North Dakota border. The Yellowstone has survived as one of the last, large, free flowing rivers in the continental United States. Lack of mainstem impoundments allows spring peak flows and fall and winter low flows to influence a unique ecosystem and aesthetic resource. From the clear, coldwater cutthroat trout fishery in Yellowstone National Park to the warmer water habitat at its mouth, the river supports a variety of aquatic environments that remain relatively undisturbed. The adjacent terrestrial environment, through most of the 550 Montana miles of river, is an impressive cottonwood-willow bottomland. The river has also been a major factor in the settlement of southeastern Montana, and retains much cultural and historical significance. Information from Montana Fish, Wildlife and Parks.