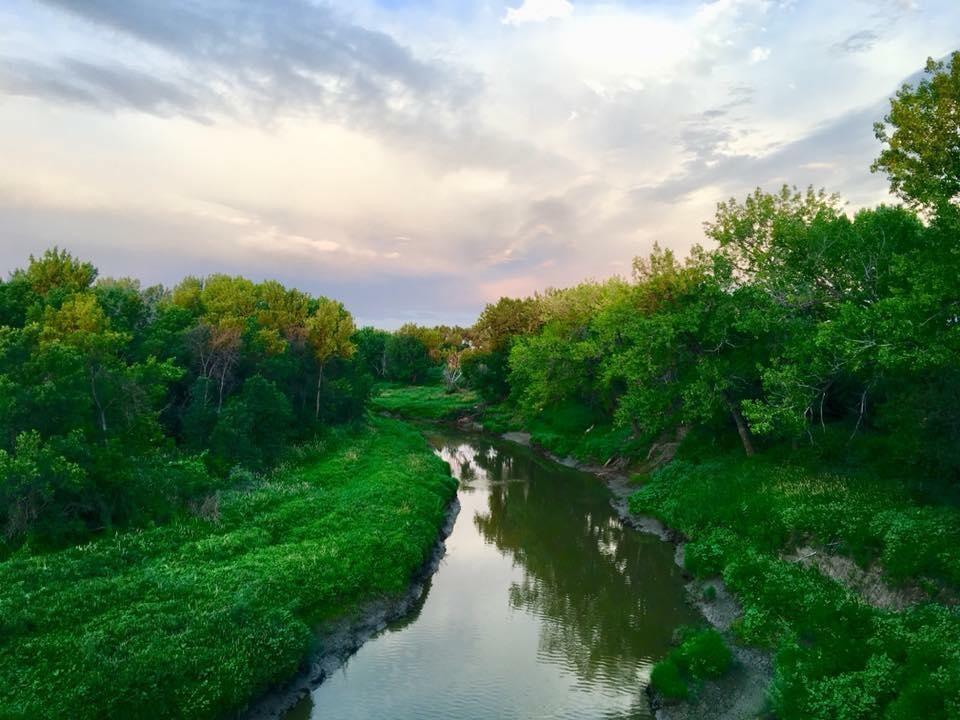 41 different species of fish roam the "Mighty Milk", but none more prominent than the Channel Catfish.  Channel Catfish, Stone Cat, and Black Bullhead are present in this body of water.  The Milk River is the home to the current state record Stone Cat, and a previous state record Channel Cat. The Stone Cat, a 0.54 lb. beauty, was caught by Dale Bjerga on June 16th, 1996. A prior state record Channel Cat, broken in 1984, was a 23lb. 4 oz. giant caught by Larry Hamilton. Although, you will be hard pressed to see fish like that, it is reasonable to catch a dozen cats in the 2 to 4 lb. range, and have a great shot at one over 6 lbs. on a typical afternoon outing. It is safe to say that the average Channel Cat is about 2.5 lbs., a 6 lb. Cat is really nice, and a 10 lb. Cat is considered a "trophy" on the lower Milk.
The Milk is very volatile due to it's contracted use for irrigation purposes and often times fish growth is dictated by flow and water levels.  Since the early 2000's, with increasingly wet years throughout Canada and Northern Montana, water has been great on this river and the native Channel Catfish has thrived.  In what used to be a 1 to 1 1/2 lb. average has now grown to a 2.5 lb. average and above.  It' is possible for a seasoned angler with knowledge of the area and small river catfish tendencies to land 30 to 35 lbs. on five fish in a single evening. This 6 to 7 lb. average would have been unheard of just 20 years ago.
The river is most accessible above Vandalia diversion dam and is even navigable with a prop boat for a 28 mile stretch of river during average stream flows.  There is a concrete ramp at Milk River Park in the community of Hinsdale with a public dock.  Below Vandalia dam, a jet boat is nearly a necessity with access at only farm and ranch crossings, irrigation pump sites, or via the mouth by way of four lower Missouri River ramps below Fort Peck Dam.
There are eleven "feeder" creeks downstream of Nelson Reservoir that can all house cats at different times of the year.  Most notably, Frenchman Creek and Beaver Creek, where fishing is often superb during pre-spawn and cats can grow into the low teens.
This river is also host to the annual Milk River Catfish Classic held in Glasgow, MT on the first Saturday of every June.
Above Information from Montana Cats Staff.

Nearly 700 miles long from its sources to the mouth below Fort Peck Dam, the Milk River is one of the Missouri River’s longest tributaries. Beginning on the eastern edge of Glacier National Park the North and South forks of the Milk River flow northeast through the Blackfeet Indian Reservation to merge just over the Canadian border. The mainstem Milk River continues 171 miles through Alberta, Canada, re-entering Montana north of Rudyard. Fifty-three miles farther southeast the Milk River runs up against Fresno Dam, completed in 1939. Above Fresno Reservoir, limited woody vegetation, highly fluctuating flow, and extremely high turbidity characterize the river. The channel is mostly shallow and highly braided. Turning due east below the dam, the river carries less sediment and runs within a single incised channel with vertical banks. From Fresno Dam down to Vandalia Diversion Dam, 318 miles, the river is fragmented by four diversion dams and one municipal water weir. East of Havre, the river winds through the pre-glacial-age valley of the Missouri, paralleled by U.S. Highway 2, and marking the northern boundary of the Fort Belknap Indian Reservation. Below Vandalia Diversion Dam, for its last 120 miles, although still a single-channel river, the Milk has well-developed riparian stands along its banks, deeper habitat, and cobble riffles. The present-day Milk River results from a history of dams, channelization, flow modification, and expansion of land use, as well as natural development. Since the 1880s, the Milk River Basin has provided water for agricultural communities. The Milk River replenishes the wetlands and prairie habitats of the 16,000-acre Bowdoin National Wildlife Refuge where over 250 bird species and other wildlife families flourish. Perhaps the river’s most important contribution to the area’s fishery resource is its alliance with the Missouri River. In its lowermost 73 miles, the Milk River provides critical spawning and rearing habitat for migratory and resident fishes, including native species of the Missouri River, such as blue sucker, channel catfish, freshwater drum, paddlefish, sauger, shorthead redhorse, and shovelnose sturgeon.
Above Information from Montana Fish, Wildlife and Parks website.

"The water of this river possesses a peculiar whiteness, being about the colour of a cup of tea with admixture of a tablespoonfull of milk.  from the colour of it's water we called it Milk River." - Meriwether Lewis May 8th, 1805.