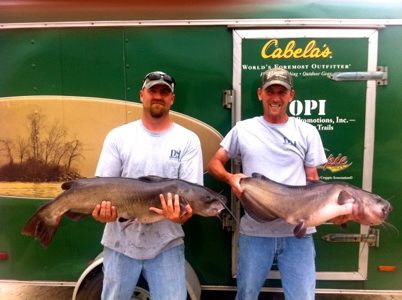 Burwell, NE 8/25/12 – The largest and most recognized catfish circuit in the country finally found it’s way to within Nebraska borders. Cabelas answered the call from many of the regions top anglers that have been clamoring for a shot at a championship event against some of the nations best and a chance to qualify for the famous Cabelas King Kat Classic held at the end of every September. The event was held at the renowned Calamus Reservoir in Northeast Nebraska, home to some of the biggest channel cats in the world, and it simply did not disappoint. Much to the pleasure of Cabelas and the Burwell, Nebraska chamber of commerce the leader board showcased just why it was a sought after location for such an event.

Thirty-five high profile teams, from eight different states, flocked to the rural area reservoir. Lincoln, Nebraska anglers, Josh Koll and Mat Helm, turned in one of the best Channel Catfish limits ever seen on the Cabelas King Kat circuit. The amazing basket tipped the scales at 118.75 lbs. An astonishing 23.75 lb. average. For their efforts they received a check for $2,500 and a guaranteed spot in the Cabelas King Kat Classic. The veteran tournament squad used an unconventional approach on the waters of Calamus, choosing to anchor up in fourteen to seventeen feet with cut shad and creek chubs. It paid off in a big way. The rest of the top five all chose to use the ever-popular drift fishing method. Taking runner-up honors were Kansas natives, David Studebaker and Rich Witt. Their five fish limit was impressive in its own right; coming in at 79.75 lbs. Rounding out the top three was Cory Muhlbach of Shelton, Nebraska and Craig Stephens of Riverdale, Nebraska with 75.4 lbs.. Craig is an experienced Nebraska Circuit angler and the president of Central Nebraska Cats.

Montana Cats was well represented by Jason Flaten of Gillette, Wyoming and Chad Dawson of Dickinson, ND. Fishing in their first ever King Kats event, they found themselves just outside the top five. Finishing in 6th place with 55 lbs., less than four lbs. out of 4th place. The top 20 teams automatically qualified for the King Kat Classic, so there outstanding finish more than got that job done. Following the weekend of events, Cabelas was so impressed with the body of water and the limits that hit the scales that they already marked a return trip for next year on August 24th, 2013. Results such as these and quality team numbers are beginning to move the circuit northwest. In 2013, Cabelas will make stops in Burwell, Nebraska, South Sioux City, Nebraska, and Grand Forks, North Dakota. News like that is certainly exciting for the competitive catfish angler in this part of the country! Please enjoy the top six results from Calamus below.