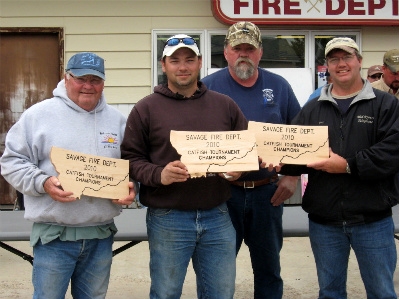 Savage, MT 6/12/10 – The small town of Savage, Montana was again all the buzz this past weekend as the annual Catfish Tourney came roaring in. Much like in past years, the tournament filled its 60-team field a few weeks in advance. Local anglers were abound and out of area teams were sprinkled in among the crowd, as is the case on the 2nd weekend of every June. In what has turned out to be one of the finest communities events in the area, this years 7th Annual Savage Fire Department Catfish Tournament did not disappoint.

The rules stayed the same for 2010 in this all out “slot fish” extravaganza. Each team is only allowed to weigh-in fish between 12″ and 18″. These rare tournament rules provide an interesting twist and continually keeps the leader board very tight. On a typical year, the winning team hovers around 6 lbs. This year provided an unbelievable day of fishing for “slots”, as the top six teams all weighed in over 6.34 lbs. Much of the drama was saved for the top of the leader board, however, as local anglers, Chad Maher, Soda Maher, and Clay Brower took this years tournament championship with a limit of five cats weighing in at 7.410 lbs., the 2nd best weight in tournament history. Nipping at their heels, was the tournament veteran crew of Brenner Flaten, Tyler George, and Cade Flaten. Boasting the third best weight in tourney history, the crew weighed in at 7.345 lbs. The Mahers and Brower’s victory of 0.06 lbs. is by far the tightest the event has ever seen. Casey Hamburg took home the separate big fish pot with a muscular cat tipping the scales at 12.11 lbs.

The whole weekend was an overwhelming success. The Friday night calcutta was well attended once again ,as many of the locals came and bid on their favorite fishing teams and good times were had by all involved. Saturday got off on the right foot, as breakfast was cooked right in front of the fire hall in downtown Savage, as teams began to gather for a fun/competitive day on the water. Teams were released in two flights beginning at 7:00 a.m. following the rules meeting. The tournament took place until 3:30, when all of the teams conjugated on the river bottom to weigh in their respective catches. As weights were tallied and fish were returned safely to the water, the teams began to retreat to the Fire Hall once again. At this time, an incredible amount of door prizes were given away and the tournament and calcutta winners were announced to the crowd. A free will farm raised catfish feed concluded the festivities on Saturday Night. If you want a change of pace and enjoy fishing for the “little guys” make sure you mark your calendar for Saturday June 11th, 2011.