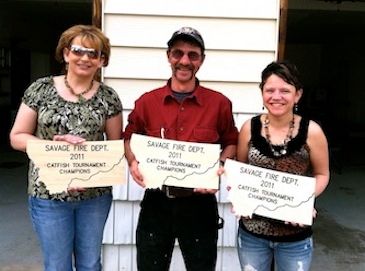 Savage, MT 6/11/11 – The 8th Annual Savage Volunteer Fire Dept. Catfish Tournament brought an all-new ball game this year. Only two weeks prior to the event, the Savage area was dealing with all-time record flows and high water. This in turn dramatically changed the traditional tournament landscape. Anglers had to deal with extremely high fluctuating waters, impassible muddy banks, and unstable weather leading up to the tournament. The prevailing thought was that it would be a struggle to catch the illusive “slot fish” needed to take home the top honors. (teams are only allowed to weigh-in 12″ to 18″ channel catfish) When anglers gathered on Friday night for the annual calcutta, the tournament organizers promised the event would go on as planned and it would be a success. 61 teams filled the competition nearly six weeks in advance. Despite the weather and high water, there was the usual excitement in the air.

This year’s event would smash tournament records, unfortunately in a way the anglers would like to avoid. Their thoughts and concerns came true as it turned out to be the most difficult Savage tournament on record. The statistics were staggering; only eleven teams would catch a fish, and twenty-one total catfish would hit the scales. Not a single team weighed in their limit of five “slot fish”, and one 17″ slot fish would be good enough for sixth place and a spot in the prize money. Tournament veteran, Jim Messer, would captain the championship squad. Jim’s team weighed in four cats at 5.175 lbs., blowing away the field by more than 6 tenths of a pound. Shawn Conradsen captained the runner-up squad, catching four fish at 4.455 lbs. Local angler, Bink Miller, cashed in on a separate cash pool reserved for the big fish contest. Bink’s big cat tipped the scales at 7.955 lbs.

As is customary at the Savage catfish tourney, the fire dept. hosted the community and tournament anglers to a farm raised catfish feed following the weigh-ins and award presentation. Despite the high water, the event once again went off without a hitch. The fire dept. and the whole community of Savage should be commended for their outstanding hospitality and ability to put on such a fun-filled event. The 9th Annual Savage Volunteer Fire Dept. Catfish Tournament will return to Savage on Saturday, June 9th 2012. As a reminder, returning teams will be mailed entry forms next April, they will have until May 1st to fill out the form and return. On May 1st the tournament will open to the public and new anglers will be able to join in on the fun. Hope to see you all next year! Please enjoy the top six results from this past weekend’s event below.