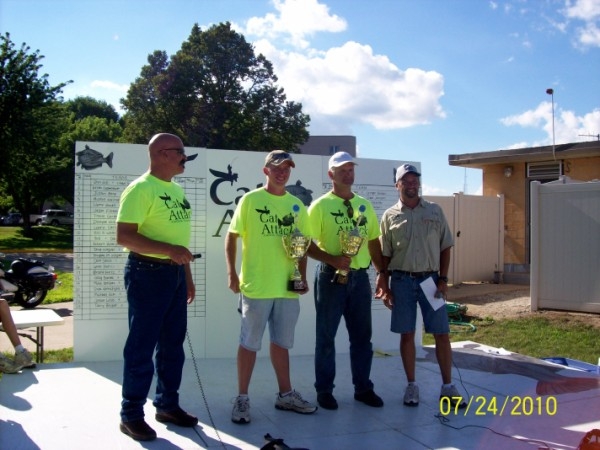 South Sioux City, NE 7/24/10 – What a weekend in Northeast Nebraska as the First Class Cat Attack came roaring into town. For the first time in tournament history, the headquarters were moved across the Mighty Missouri River from Sioux City, Iowa to South Sioux City, Nebraska. It turned out to be a great move! The city of South Sioux couldn’t wait to play host to one of the finest catfish tournaments in the country, and it didn’t disappoint. Over the course of the past six years, the First Class Cat Attack has attracted anglers from all over the mid-western United States for a chance at some catfish fame. The 7th Annual event was no different, as 45 teams from 6 different states converged on the Missouri and Big Sioux rivers. The anglers were once again targeting all three major species of catfish; the Channel, Blue, and the Flathead.

This years version of the Cat Attack provided teams with an all new obstacle to overcome as both rivers were running much higher than normal. To make matters worse, the South Sioux area was hit with another couple inches of rain just days before the event. The added precipitation from the storm had the Big Sioux River bursting at its seams and the Missouri River on a rapid rise. The high water undoubtedly put some teams in a panic and out of some of their comfort levels. As it turns out, the water levels had a drastic impact on the overall catch rate. Not a single team weighed in their limit of 10 catfish, and 20 teams failed to catch a single fish.

There were many teams who seemed to use all of it to there advantage, however, none more impressively than the duo of Travis Carter, of Elk Point, South Dakota, and Dan Foss, of Onawa, Iowa. The impressive teammates focused their efforts in the Missouri River, jumping on the competition early on in the day. They ultimately weighed in eight catfish, six flathead and 2 channels, that tipped the scales at 26.40 lbs., more than 12 lbs. clear of the next closest competition. Travis had this to say about the dominating performance which netted $1,373, “Because of the rain, I thought it really hurt the Big Sioux more so than the Missouri, so it that was our preference today.” Taking runner-up honors was the local connection of, Shane Jones, of Westfield IA, and Adam Conlon, of Sioux City, IA. They paired up on a very nice basket of eight Channel cats weighing 14.15 lbs. Rounding out the top three was a pair of anglers out of Sioux Falls, SD., Roger Titze and Tron Glaser with a very respectful 13.70 lbs. They would also cash a check for the biggest catfish of the tourney, Roger’s 8.60 lb. Flathead would net them an additional $220.

A special thanks goes out to tournament director Pat Carter, for his continued work with the First Class Cat Attack. His efforts have laid the ground work, for continued growth well into the future. $6,533 in cash and prizes were given back to the anglers this year, as the payouts continue to be impressive and bring anglers from long distances. The top 20 teams all brought something home to show off for their efforts. 2011 is expected to be even bigger and better for the Cat Attack, so mark your calendars for the final weekend in July and make your way to South Sioux City for some competitive catfish angling. One thing is for sure, the Cat Attack is here to stay! Please enjoy the pictures, podcast interviews, and complete finals results from this past weekends event below.