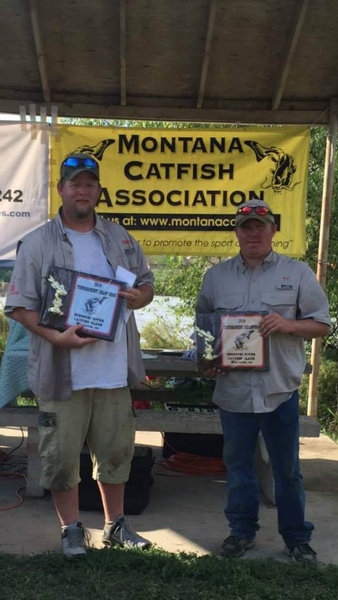 This year’s tournament kicked off at 9 a.m. on a gloomy Saturday morning, as teams set off on their eight hour adventure to try and be crowned tournament champions. Along with the gloomy weather, teams experienced a steady climb in the flow of the river throughout the day. Several competitors commented that the storm front moving in overnight rendered nearly all their pre-fishing that they had accomplished the previous few days useless.

As five o’clock was rapidly approaching so was a severe thunderstorm. With more and more anglers returning to the Lewis and Clark Bridge Recreation Area; they also brought a few rain drops in with them. However, after a few baskets of Missouri River catfish were weighed the sun started shining, allowing the popular event to finish with hardly a cloud in sight.

No matter if it’s your first catfish tournament or you’re a veteran on the Montana Cats Circuit, weigh-ins are always an action-packed event! Anglers brought their baskets up one by one to determine their fate. Having weights ranging from just below a pound to over thirty pounds of fish, amazingly 22 of the 45 teams brought in over 19 pounds of fish. The crowd was excited and restless to see the final results. After adding up the totals and sorting through all the teams the results were in. With a surprising two pound difference between each of the top teams, first place went to Bryon Armour and Ty Thomas both of Lewistown, MT with a grand total weight of 36.53 pounds. Second place, with a weight of 34.53 pounds, went to Rod Seder of Billings, MT and Rob Seder of Hardin, MT. Coming in third were area anglers Brady Mueller and Brandon Mueller of Sidney, MT with a weight of 32.91 pounds. Bryon Armour also took home the Big Fish title with a sumo cat weighing in at 14.63 pounds. The fish was caught early in the tournament and had to be kept alive through the entire eight hour fishing day. In addition to taking the Big Fish title, Bryon Armour also broke the record for the biggest catfish ever caught in a Montana Cats Circuit event. Nice work Bryon!

This year’s Missouri River Catfish Clash also got the privilege of handing out the B ‘n’ M Angler of the Year award. This award goes to the angler that has accumulated the most points throughout this season’s Montana Catfish Association tournament circuit. The circuit leaderboard was extremely close coming into the weekend, meaning it would all come down to the angler who performed the best at the Clash. On the heels of his 3rd place finish in the Clash, a big celebration broke out in the crowd as Brady Mueller of Sidney, MT found out that he would be taking home the 2nd ever B ‘n’ M Angler of the Year trophy by scoring an impressive 60 points throughout the summer’s catfish circuit. Following close behind with 56 points was Blake Gauer of Park City, MT. Congratulations to all the competitors that competed in any or all of the Montana Catfish Association tournaments this year.

A BIG thanks is also reserved for all the sponsors and everyone who helped make this a great year for the Montana Catfish Association. On behalf of Montana Cats, we hope to see all of you back for the Clash next year and break another record by filling this tournament at 60 teams for the very first time. Go ahead and pencil in Friday August 15th, 2015 for the annual Calcutta of the fishing teams at the Four Mile Bar and the 5th Annual Missouri River Catfish scheduled for the following day on Saturday August 16th, 2015! See you on the water.

Pictures for this event can be found here.