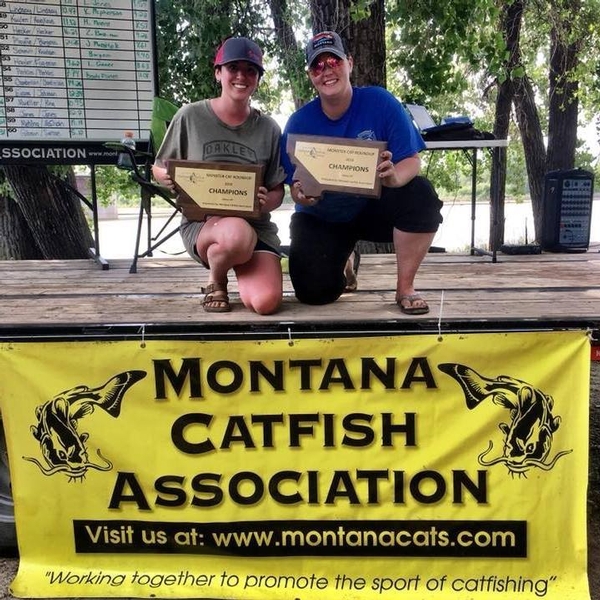 7/21/2018– Sidney, MT – Congratulations goes out to KaCee McPherson and Nicole Peterson both of Savage, MT on winning the 10th Annual NE Montana Monster Cat Round-up today in Sidney with 33.28 lbs! It’s a truly historic victory. McPherson and Peterson are the first “all female” team champions in Montana Cats Circuit history. They are also the first shore team to ever win a MT Cats event outside of the Milk River Catfish Classic! Until today, there had never been a shore champ at the Yellowstone Challenge, the Missouri River Catfish Clash, or the Monster Cat Roundup. Very impressive! The ladies stayed in one spot all day and it produced early and often as they had over 30 lbs. within the first hour of the event. Making things even more impressive, this is Nicole Peterson’s 2nd WIN on the Yellowstone River in less than two months. She was on the 3-man team that took the title at the 14th Annual Savage Catfish Tournament, an event put on by the Savage Volunteer Fire Department, on June 9th.

Claiming runner-up honors, were the Flaten brothers, Jason and Brady, out of Glasgow, MT. and West Wendover, NV., respectively. The long-time tournament anglers found success throughout the day, but fished upwards of twenty different spots to land over 30 lbs. The win puts the elder brother, Jason, in the drivers seat for the 2018 Montana Cats Angler of the Year Award. Jason had already secured titles at the first two events of the season in Huntley and Glasgow; so adding a 2nd place finish to the mix will lock it up and do so in record breaking fashion! Jason Flaten will be awarded the prestigious accolade at the year-end Missouri River Catfish Clash in Williston, North Dakota in mid-August.

The bronze plaque went to the husband and wife duo of Blake and Lindsey Gauer of Park City, MT. The veteran fishermen caught just five fish on the day, but they made them count! Their five fish basket tipped the scales at 30.83 lbs. The Gauer’s fell Just short of runner-up honors, however, they did claim the all-important “Big Fish” award for the day. Lindsey hauled in an 11.63 giant post-spawn kitty. The catfish broke the tournament record and was worth a HUGE payday of $2,000.

Steve and Ashley Harris deserve to be recognized for ten years of service to the Monster Cat Roundup. It has grown by leaps and bounds and their hard work does not go unnoticed by the Montana Catfish Association or the anglers that enjoy this event year in and year out. Also, BIG thanks should be reserved for the Ranger Lounge once again for being a gracious host for the Friday night Calcutta and Social and the post-tournament “Fisherman feed”. We appreciate your loyalty to an outstanding community event.

The MT Cats Circuit now moves on to the fourth and final leg, the Missouri River Catfish Clash. The event will be held in Williston, North Dakota on Saturday August, 18th and is limited to the first 60 boats entered. The B’n’M MT Cats Angler of the Year will also be awarded at the conclusion of this event. It is sure to be an outstanding culmination of another fantastic MT Cats season! We hope to see you there. The Monster Cat Roundup will now sign off until the 11th Annual event. It will be held back in Sidney on Saturday July 13th, 2019. Sign ups will begin immediately.