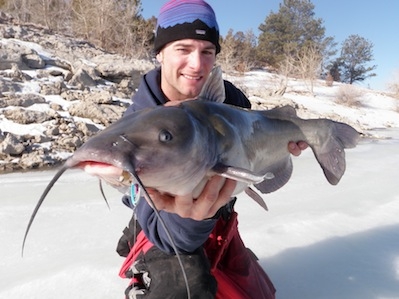 Later that day we drilled more holes and decided to wait them out. We fished the rest of the day without a bite.

Since that day I have increased my success rate by executing some key techniques and presentation tactics specific to channel cats. These ten tips are the foundation for Ice-trolling.

1. Mobility: An ATV or Snowmobile is critical in transporting gear and fishermen throughout your day.

2. Ice Trolling: During a normal day on Glendo we employ a run-and-gun technique. We always bring two power augers with very sharp blades. As you approach a likely fishing location, drill a grid of holes anywhere between ten to forty feet deep. Generally, I like about fifty holes to work over, given you have a few fishermen. Jig each hole for no more than five minutes. Resist the urge to sit on one hole hoping they come to you. If no one in your group catches a fish, move locations and start the process over. In an average day of ice trolling expect to drill upwards of two hundred holes.

3. Invest in Quality Electronics: With the recent introduction of flasher units on the ice scene they are now becoming more economical for the average ice fisherman. A flasher unit will increase your catch rate not only by identifying unproductive water, but also should show you how the fish react to different presentations. Don’t hit the ice without it.

4. Be aware of baitfish: If you mark many schools of baitfish, odds are the predatory fish are close by.

6. Don’t get too caught up on lure selection:

As you become a more seasoned ice angler you will begin to narrow your lure selection to only the ones that are successful. Rarely do I fish with more than five lures during a day on the ice. In fact if a lure is producing well I often will only fish that one lure.

7. Seal the Deal with Presentation: In the wintertime fish are triggered to feed by #1 sight, #2 lateral line (low frequency vibrations), and #3 taste/smell. To seal the deal and draw more strikes, tip your lures with a small minnow head. These can be live minnows or preserved bait. The added offering of scent is the total package and could mean the difference between a strike and just a look.

8. Fish Prime Feeding Times: Catfish, among other species, are triggered to feed by light transitions. Many factors play a part in this including snow cover on the ice. Prime times for catfish include sunrise to 1:00 PM and sunset until midnight. If you fish during peak feeding periods you will see a direct increase in your success rate.

9. Charge it Up: Try adding glow lures to your arsenal. They are perfect for low light situations and night conditions.

10. Be a Weatherman: Watch the solunar calendar and any changes in barometric pressure. The most conducive weather for catching fish is consistent patterns.

The forage base on Glendo Reservoir consists of gizzard shad, juvenile carp, crappies, and perch. Along with walleyes the channel catfish is an apex predator that continues to feed on and follow migrations of baitfish throughout the winter months. Very few bodies of water in the United States harbor such healthy numbers and average size of catfish. The combination of forage base, access, and size ranks this lake at the top of my list for winter catfishing destinations. If you execute these basic ice-trolling techniques on your next ice fishing trip be prepared to have a successful day on the water. During the 2011 season we have landed countless catfish, many large walleyes, perch, carp, and crappies using the ice-trolling method. Good luck on the ice this spring and be safe.