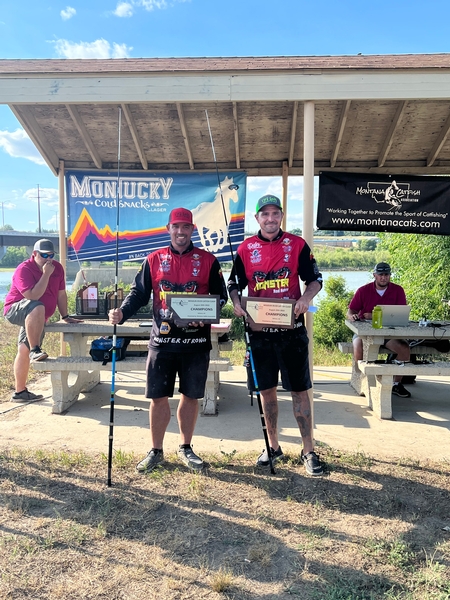 8/20/2022 (Williston, ND) – They needed a big day.  They delivered.  Eddie White and Eric Braunberger, both of Miles City, MT., were trailing four other fishermen for this year's Angler of the Year honors heading into the final event of the season.  Anything less than a tournament championship would have probably meant falling short of the coveted prize.  At the end of the day, their run and gun approach, while pounding "cover", paid off with a Missouri River Catfish Clash title!  The champs weighed in 32.21 lbs. on five Channel Cats to give them exactly what they needed to secure BnM Poles AOY honors.

Thirty nine teams fished this year's 12th Annual Clash, headquartered out of Lewis and Clark Bridge in Williston, North Dakota.  Twenty one teams weighed in over 20 lbs.  The third most in tournament history.  (24 in 2019 and 23 in 2013).  All but one team, brought fish to the scales.  Big fish were a little harder to come by this year, but multiple teams still put baskets together that averaged over 6 lbs. per fish.  Claiming runner-up honors, were tournament veterans, James Decker and Steve Lowery, both of Sidney, MT., with 30.37 lbs.  Decker and Lowery were previous champions in 2015 and are no strangers to chasing big fish on the Missouri River of North Dakota.  The 3rd place squad, Austin Bement, Sidney, MT., and Casey Nagel, Minot, ND. also cracked the 30 lb. barrier, with 30.08 lbs.  An impressive day on any body of water!  4th place went to a team of brothers out of Glendive, MT.  Tim and Steve Linder put a large upgrade in the boat in just the last few minutes before weigh-ins.  The big cat catapulted them up the leaderboard and gave them 29.19 lbs. Rounding out the top five were defending champions, Brenner Flaten, Glasgow, MT., and Cole Plouffe, Glendive, MT.  Using three fish in the last hour to move them from outside the top 20 and into the Top 5, Flaten and Plouffe ended with 27.21 lbs.  The 5th place finish also helped 3-time defending BnM Poles Angler of the Year, Cole Plouffe, claim a share of this year's AOY honors.  An unprecedented 4th straight.  Congratulations Cole!  Kellie Lindsay, Laurel, MT., won big fish honors in this year's Catfish Clash.  She was a teamed up with her husband Todd when she boated a 12.78 lb. trophy.  Good job Kellie!

Glasgow anglers, Chad Dawson and Brenner Flaten, rounded out this year's Top five in the Angler of the Year Standings.  This is a 2nd consecutive top four finish for Dawson, as he finished runner-up in 2021.  For Flaten, it marks a 6th career Top five finish in the Final MT Cats AOY standings.  That will bring the 2022 Montana Cats season to a close in what was another highly succesful year on the water for the entire organization.  This season brought the addition of entry fee "side pots" and it was very well received by the membership.  The organization intends on continuing with the practice of "side pots" until overall team numbers justify a flat entry fee bump.  The Montana Catfish Association could not be one of the finest competitive catfishing circuits in the country without ALL of our inidividual tournament sponsors as well as each of our circuit-level sponsors including; BnM Poles, RS Jet Boat Anchors, Thrivent Financial w/Shelly George, Enduro Products, Montucky Cold Snacks, Marathon Pipe Line LLC, and Easy Clips Culling System.

The Montana Cats Circuit will be back before we know it!  Please join us in the Huntley, Montana on Saturday May 13th for the kickoff to the 2023 season with the 17th Annual Yellowstone Challenge.  Until next time.  Happy Cattin'.