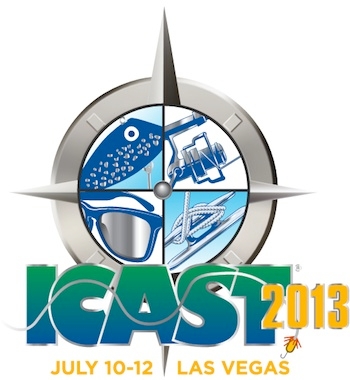 I prepped for the event by browsing all of the attending company’s websites’. I then made a list of every company I wanted to talk to, as I would only have Wednesday, with my flight leaving early Thursday morning. I arrived Tuesday evening for what is called “the new product showcase”. We had two hours to view all the brand new products and cast our vote for what we deemed as the best product in each category. After casting my ballot and taking in some Vegas nightlife, I was up early to try and complete my busy schedule.

I will just talk about products that I found of interest and were new to me. I won’t cover the products that many of you know I use on a regular basis (ex. St Croix rods and Shimano baitcasters). Some of these products are so new they aren’t even on the market yet, but keep a look out and they should be able to be purchased within the next couple of months.

Let’s start with some terminal tackle. Thundermist is making a T-Turn 3 way swivel that’s very nice. I have actually used this one a couple times this summer and it has worked very well. Not sure if there’s anyone out there like me, who likes to accidently tie up their slip rig without a sinker, instead of cutting the line and retying, just pop on a Quick Slide from Sea Striker. Easy-2-Hook was a company that I had dismissed as gimmicky when checking them out online before the show. But after seeing it tied in real life, I think there’s actually some potential here. The hooks looked of good quality and I will definitely give them a test run.

Rocky Brook Sinkers has a different idea, making sinkers out of limestone. Obviously these might have limited applications, as often you need that sheer weight of lead. But for those that have vibrant imagination as myself, you may like to toy around with these in a few situations. And for those fishing line junkies, McCoy Fishing Line is an American company that has been around since 1935 and has entered the catfish specific line category with its latest monofilament, Tuff Cat.

There are more and more catfish attractants hitting the market every year. I did a quick interview with Bite-on fish attractant and also an interview with Pautzke Bait Co. Missouri River Catfish Clash participants can expect a free bottle of Catfish Nectar to try out, courtesy of Chris at Pautzke. Magic Products Inc. offer a plethora of manufactured catfish baits and preserved natural baits, aerators and aeration systems.

There are some interesting breakthroughs coming in the way of underwater cameras. Vexilar will be introducing the FP 100 Fishphone, which will be a camera that sends a wifi signal to your phone for easy viewing. And Aqua-Vu will be coming out with a new technology called Looking Glass, which can greatly enhance your viewing in dirty or stained water.

I made a quick buzz over to the fly fishing section to chat with Adipose Boatworks out of Helena. These guys specialize in drift boats but also sell SeaArk jet boats. If you are in the market, keep these guys in mind. There was one other stop I had scheduled in fly fishing, and that was Morning Star Lanyards. I thought this product could definitely come in handy to the bank fisherman that like to put in the miles, or the boat fisherman wanting his accessories at arm’s length.

Some other products that I found interesting were the Boomerang Tool, which is a retractable line snip with a built in LED light. I was actually able to use this in the field already, and give it my complete recommendation. RIGRAP is a company specializing in plastic cases that look like they would be excellent for managing your pre-tied slip and 3-way rigs in a clean and convenient way. Many of you are familiar with American Premier, a company that makes a ton of catfish specific products. But it was their Ultimate Line Winder that stole the show for me. I had seen pictures of it before but had dismissed it because I didn’t think it would eliminate line twists on spinning reels. But after seeing it in action I will definitely be making a future purchase. One last product that really caught my eye in the odds and ends category was the Spot-Knot. It is a small plastic device that will allow you to add a bobber-stop at any location, directly to your fishing line in seconds, without removing any tackle. Check out the interview, and these are made in North Dakota!

Let’s take a look at some rods and reels that caught my eye. Daiwa has a Theory Carp Rod that looked great (but expensive) if you are in the market for a 12’ rod. I also got to play with their 3 Bite N’ Run spinning reel models that look to be solid performers for their various price points. Shimano is coming out with a new Baitrunner OC, which looks to retail in the $120 range. Okuma is coming out with a new high-end cat rod. It retailed for $115, but I only played with one size that was rather stiff for our Montana applications. I couldn’t find any information on-line about this model so we’ll just have to keep our eyes open down the road. I was able to chat with the great guys at Seeker Rods, and they seemed excited when I told them how much I enjoy catfishing with their Blue Lightning Series of rods. One catfish specific rod that was new to the market this year was the B’n’M SilverCat. I wasn’t sure if the action on these rods would work for us up in Montana, as the rod claims a line rating of 15-30lbs. But after playing around with them, I was pleasantly surprised. This is definitely a rod that will require some on-the-water testing!

I was finally able to meet up with Jeff Williams from Team Catfish. And he ran me through their complete line of catfish specific products. We did a quick interview, focusing on their new baitcaster that will be coming out very shortly; it looks very well made, and could become a staple in the catfisherman’s arsenal. Jeff was very appreciative of what we are doing up at Montana Cats, and hopes to make a trip up next year to tangle with our big channel cats.

I had the opportunity to meet up with the group at Rippin Lips. These guys really have it together, and I had a great time talking catfishing with them. A couple products that I really liked were their No Trace odor eliminator, and their new line of rods, the Super Cat, which isn’t quit available yet, but should be in the very near future. Check out the interview I did with Dennis and visit their Facebook for some other interviews they did at ICAST.

I was also able to catch up to the crew from Whisker Seeker Tackle. These guys are new on the scene, as their website just came up on the 18th. Check them out as these guys are bringing some new techniques into the catfish world. I know of a few members of the field staff that have already received their order from them and looking forward to testing the products out on the water,

Well that about wraps it up, I had a great time down in Vegas, and hope that all those that read this article , will find at least one new product that they will give a try. For those that have any questions on these products or would just like to have a discussion, we will have a thread on the message board.

0 Comments on Montana Cats At 2013 ICAST