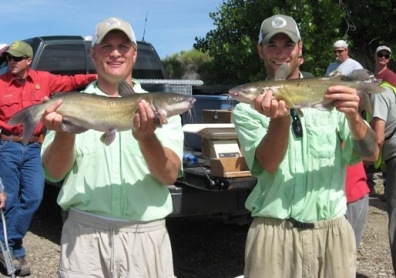 Lovell, WY 6/20/09 – Much like the rest of the Montana Cats Tour events, the 2nd Annual Bighorn Catfish Tournament experienced growth in all areas from the previous year. Friends of Bighorn Lake once again ran this tourney in conjunction with the Montana Catfish Association, and experienced a rise from 12 teams at last years inaugural event to 17 this year. All seventeen teams fished out of boats on a sunny 90-degree day, however, teams had to deal with numerous obstacles on the water. Not only was the heat scolding for the second straight year, but they also had to fight the rapidly rising water. Big Horn Lake had risen 12 feet in the four days previous, causing water to creep into shoreline trees for the first time in many years. The debris on the entire waterway was out of control.

Fishing was no doubt affected by the combination of the high temperatures and rapidly rising water. Only four teams were able to crack the 10 lb. barrier and only two teams were able to land their limit of six fish. Despite the tough conditions, fisherman turned out a valiant effort and brought in their share of channel cats. Montana Cats Field Staff members, Brenner Flaten and Tyler George, used a run and gun attack to land their limit of 6 cats that weighed in at 19.48 lbs. to take home the title. Brenner would also land the big fish of the tournament, weighing in at 6.2 lbs. Tyler had this to say on the victory, “With the help of a jet boat this year, we were able to cover lots of water and experiment with fishing new structure and it paid off.” The combination of a tourney title and the big fish netted the duo a cash prize of nearly $500. Powell, Wyoming anglers, Eric Menning and Zach Brando turned in an impressive limit of six catfish tipping the scales at 14.76 lbs. and good enough for a runner-up finish. Team Nagel out of Columbus, Montana rounded out the top three with five cats at 13.76 lbs.

Every catfish that was caught was once again weighed, measured, and tagged by Wyoming Fish and Game. We are proud to report that only one fish failed to make it out alive, proving once again that anglers are doing an excellent job on the water maintaining their catch. Extremely hot days like this one, makes it even more pressing for the anglers to make sure their fish have fresh, circulating, and cooler water. FOBHL will once again run next year’s event on the 3rd weekend of June 2010, and they expect to have even more teams participating. The 2009 Montana Cats Tour will come to a close in Sidney, Montana with the Inaugural Monster Cat Roundup on the Yellowstone River Saturday, July 11th.